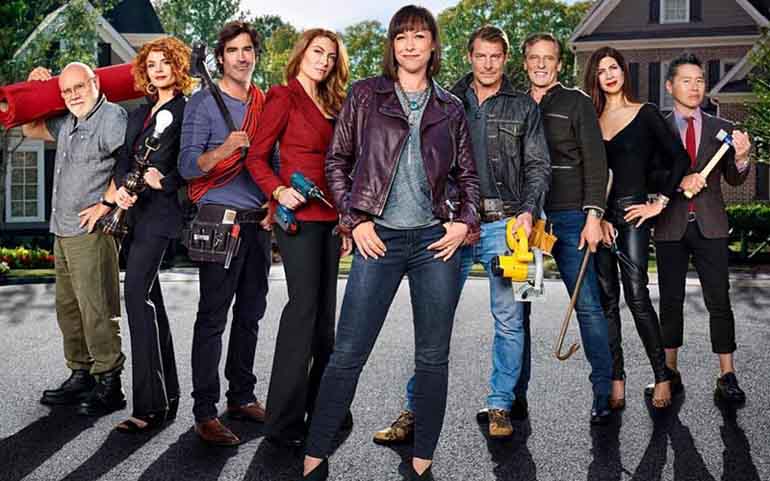 Fan favourites from the 2000 show Trading Spaces on Discovery Home and TLC’s cable channels are in for a treat this year owing to the reboot of the show. It comes from the announcement that was made last year after the show’s 10-year hiatus. The new season premiered on April 6th and saw the return of old cast members as well as latest changes. The revamped show has seen new designers brought in and its budget increased tremendously. Here’s a look at the new Trading Spaces cast salaries and net worth in 2019.

Mindy Paige Davis’ current net worth is estimated to be $1.5 million with an average salary of close to $62 thousand. She is mostly known as the host of the show replacing Alex McLeod in 2001.

Born on October 15th, 1969 in Philadelphia, she grew up and majored in theatre and dance where she worked for the Broadway musical for over two years. Other appearances on screen include Iron Chef America and Home Made Simple that she anchored back in 2011.

Soto’s current net worth is currently estimated to be over $2 million with her salary unknown. The multi-talented personality graced us as the host, judge and expert in several cable network shows and interviews with celebrities and artists alike.

Born in Miami from a Cuban family, she also grew up to become a successful interior designer as seen on The High Low Project on HGTV. Together with her boyfriend Steve Grevemberg, she is now the proud mother of a beautiful daughter named Olivia born on November 5th’2015.

John joins the team with his net worth and salary still under review. The former Turkish fashion model, television personality adds his designing expertise to the crew. He is openly gay.

Born on January 7th,1977, he has a Masters in Architecture from the Harvard graduate school of design. He later moved to New York to start his own design company and has appeared on several TV shows including ABC family’s Knock first, Designed to Sell, Curb Appeal: The Block and Fox’s Home Free in 2015.

Also joining the series is Kahi Lee, an interior design expert whose current net worth and salary are unknown. Details of her financial status will be revealed as soon as they surface.

Born in Washington DC and raised in California, she grew up taking centre stage as the host of Design on a Dime on HGTV. The designer has also made several guest appearances on talk shows like The Tyra banks show and G4’s Attack of the Show to name a few.

Finding information regarding Brett’s net worth is as hard as the wood he carves as a Carpenter on the show. However, Branding him as a carpenter would be a gross mistake as he has so much talent in various fields.

Tutor’s talents are endless with an incredible resume filled with experience as a stuntman, home inspector, rock climbing guide, songwriter-singer and guitarist and a survival specialist. That’s not all, born and raised in Austin, Texas; he won the UCT International Jr. Golf Tournament at age 12. The all-rounded carpenter later trained in Martial Arts, volunteered in Humanitarian relief efforts based in Africa, Kenya before enlisting in the U.S Air force at just 21.

A model turned contractor adds to the group as a carpenter. Growing up as daddy’s ‘little boy’ she became handy while following her father’s footsteps. She owns Neat Freaks LA, a private contractor business for home improvement. Despite all this, her net worth and salary are still under review.

Born on September 20th, 1989 in Pennsylvania she grew up with a passion for arts. Joanie’s show on the DIY network called Run My Renovation attributes to her licensed business. Contrary to her line of work, she was also the runner-up of America’s Next Top Model on its 6th cycle.

Nathan Jay Berkus’ net worth as of 2019 is estimated to be close to $18 million which is attributed mostly from Nate Berkus Associates, his interior design firm. His fame grew from the appearances he made on The Oprah Winfrey Show.

Born on September 17th, 1971 in Orange County, he pursued a career in design after successfully graduating with degrees in Sociology and French. In 2010, he started his show, The Nate Berkus show that premiered on NBC Network. He is openly gay and married to Jeremiah Brent

Jeremiah’s current net worth is currently still under review. However, he is believed to be making huge profits due to the lavish lifestyle he lives from buying penthouses valued at over $10 million

Born on November 24, 1984, Brent had the eyes of a real artist. He matured and became a self-taught designer establishing the Jeremiah Brent Design, a full-service interior design firm. He currently resides in West Hollywood with his husband Nate and their two children.

Doug’s charisma and character make him the unique and creative designer on the show with mind-blowing creative ideas as seen in his works. He is also a philanthropist as well as a captivating, inspirational speaker. His salary and net worth is unknown

Other appearances include being the former host of TLC’s Moving Up and America’s Ugliest Rooms. He completed his education at the University of Illinois and later authored a guide to home interior designs Doug’s Rooms: Transforming your Space One room at a time.

Currently based in Atlanta, Hildi Santo’s net worth rises above $5 million mostly from her creative designs that have a special classic touch.

The Cuban interior decorator was born on April 4th,1961 in Raleigh, North Carolina where she grew up and later studied Industrial relations and Economics at the University of North Carolina in Chapel Hill.

Reliable sources indicate that Vern Yip’s current net worth totals to an approximated value of $8.4 million attributed to all his property accumulated since he kickstarted his career as an interior designer.

Also currently based in Atlanta, Yip celebrates his birthday on June 27th,1967 in Hong Kong but later moved to America where he grew up and studied. Yip’s work as an interior designer went as far as landing him a job on HGTV’s Design Star.

Frank’s net worth as of 2019 is close to $15 million. He has amassed his fortune from the many years he has dedicated to service in various fields; ranging from teaching in elementary school to being a full-time florist.

Born on September 24th,1947, the old-timer owns a craft company called Mosey ‘N Me and runs it with his lovely wife who is when he is not busy as an interior decorator on the revamped show on TLC’s network

Laurie returns to TLC as a designer, author, and captivating speaker. She currently has two children, Gibson and India whom she cares for in Memphis where she resides. She hasn’t disclosed her salary nor her net worth

Born on May 23rd, 1971, she grew up to receive her Bachelor’s degree in Broadcast Journalism from SMU in Dallas before relocating to study interior design. She authored her first book in 2005 called Discovering home that sold far and wide across the country.

Tygert Burton Pennington has an estimated net worth of close to $13 million. This is after his successful TV career on Extreme Makeover where sources believed he earned around $75 thousand per episode.

After attending The Art Institute of Atlanta where he was born, he graduated with a diploma in commercial art. He didn’t waste time before starting on work as a carpenter.

Nicholas Oosterhouse’ net worth of over $2 million is mostly because of his time as a TV personality on several shows like Carter Can on HGTV, Red Hot & Green, Million Dollar room and celebrity Motorhomes.

Growing up in Michigan as the youngest of four, he pursued a modelling and acting career. This was upon graduating from Central Michigan University in Mount Pleasant. He got his breakthrough in 2003 after landing a job on Trading places on TLC.