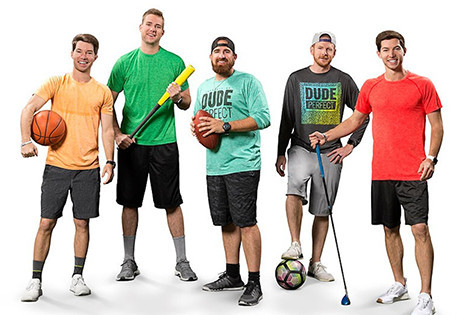 Dude Perfect is an American sports collective that was created by former roommates who attended Texas A&M University. Its members include the likes of the Cotton twins, Cory and Coby; Tyler Toney, and Garrett Hilbert.

The five friends founded the group back on March 16th, 2009. A day later, they set up a YouTube page. In over the decade that it has been active, Dude Perfect has amassed about 54 million subscribers.

The team is mostly known for their trick shot videos, some of which have even featured on ESPN’s E:60. Find out what Dude Perfect’s net worth is right here.

Like most YouTubers, Dude Perfect makes most of their money from their work on the social media platform. Presently, it is estimated that the group earns around $13 million every year. Breaking it down, we found that this translates to about $1 million each month.

With an average of 265 million views every month, it is not hard to see how they make this much money. Besides YouTube, Dude Perfect has also featured on numerous television shows. These include shows like Pardon the Interruption, SportsNation, and First Take.

Some of the merch available at their online store include jumpers, hats, basketballs, and even gift cards. As things stand, Dude Perfect’s net worth is $30 million.

Dude Perfect is made up of guys who are sports fanatics. As such, they like to attend several sporting events together. They are also video game enthusiasts, which is evident by the fact that they attended an event sponsored by Nerf and Fortnite. The team also owns a property in Frisco, Texas, which serves as their main headquarters.

Most people will not be aware of the fact that Dude Perfect started off as a bet over a few trick shots, with the main price being a sandwich. Gradually, this evolved into a YouTube Channel that has over 11 billion views. To date, their most popular video is titled ‘Water Bottle Flip 2.’

It has a total of 342 million views. Their second most popular video is titled ‘Ping Pong Trick Shots 3.’ Presently, it has 293 million views. In the decade that they have been active, the team has managed to break a plethora of Guinness World Records.

In 2016, Dude Perfect launched a television show on the CMT network.