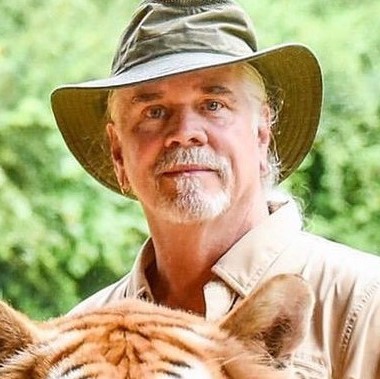 Mahamayavi Bhagavan Antle, famously known as Doc Antle, is an American Trainer, Conservationist, and Author. He is known for devoting his life’s work to establish a close relationship with wild animals like the big cats, great apes, elephants, and aardvarks with disabilities.

Don Antle is currently the founder and Director of T.I.G.E.R.S., (The Institute for Greatly Endangered and Rare Species). He has worked with animal experts in films like Dr. Dolittle.

In addition to that, he also provided animals for various movies like The Jungle Book and The War. Discover how Doc Antle has achieved his net worth.

Research done shows that more than 500 of Doc Antle’s park animals have been featured in films and T.V. projects. As you know, he owns T.I.G.E.R.S. in Myrtle Beach. How much do you think Doc Antle charges for a visit to the safari park? Can you also guess his net worth?

Doc Antle’s safari park runs 26 weeks in a year, an average of forty people in a single tour. In 2015, according to Rolling Stone, the park’s annual income was about $1. 3 Million. Aside from earning from his safari park, Don Antle has also been paid a handsome amount for his T.V. appearances and services.

Information on Doc Antle’s current residence is unavailable. However, through his social media, we can see that he is used to a simple lifestyle.

Doc Antle once appeared in Brittney Spears stage performance, ‘I’m a Slave 4 U’ in 2001. The performance featured a caged tiger (wrangled by Doc Antle) and an albino snake. He has also worked with other artists like Ashante, Janet Jackson, and P Diddy.

Don Antle and his animal team actors have worked alongside famous actors such as Jim Carey (Ace Ventura: Pet Detective) and Eddie Murphy (Dr. Dolittle). He was featured on a Netflix television documentary, “Tiger King: Murder, Mayhem and Madness” in 2020.