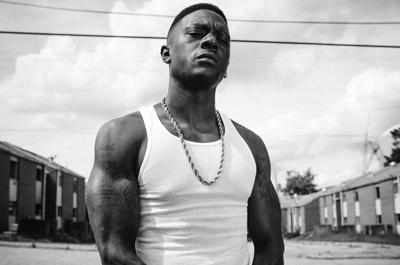 Boosie Badazz, formally known as Torrence Ivy Hatch Jr., is an American Rapper. Besides that, he is also a singer-songwriter and an actor. Boosie rose to fame after he joined the Trill Entertainment and Atlantic Records. He released various albums like; Incarcerated, Bad Azz, In House, and others.

Bossie’s other achievement is that he founded his record label, Bad Azz Entertainment, in 2008. Boosie is not only known in the rap world; he has also appeared in films like Ghetto stories (2010) and Glass Jaw (2018). Prepare to learn more about his career and net worth in detail.

Mr. Boosie has been in the music game for decades now. This year, Torrence Ivy Hatch Jr’s net worth is estimated to be around $800,000. Since he began rapping at his young age, we know that he has been collecting his paychecks from time to time since the ‘90s.

Baddazz’s second source of income is from his clothing line, ”Jewel House” and his two brands; Badazz audio and Boosie Juice. Badazz earbuds are sold at @$109 while Boosie Juice is sold at @$21.99 (700ml bottle). Boosie Badazz now has a total of 1.2 Million YouTube subscribers.

He is also paid by YouTube, depending on the number of viewers he has. For features, Boosie charges $15k for appearances

Where is Boosie living now? In 2015, he spent $2.6 million when building his 24,000 square foot home in Baton Rouge, Louisiana. In his driveway is a Rolls Royce Ghost/Wraith, Bentley Mulsanne, and a Dodge Challenger.

Boosie was not born in a wealthy family; hence his life growing up wasn’t easy. However, he managed to climb his way to the top thanks to his successful music career.

Earlier in 1996, Boosie’s cousin, Young Bleed, introduced him to a rapper known as C-Loc. In 2000, he recorded his first-ever album, ”Youngest of da Camp”.

Furthermore, he became more famous after joining Trill Entertainment, where he released the album, ‘’For my Thugz’’. Boosie was eventually paired with a rapper called Webbie.

In 2008, he released ‘’Lil Boosie Presents: The Click’’. Soon after, he was featured on Webbie’s single, ‘’Independent’’ and ‘’Out there Grindin’’ by DJ Khaled. His latest album, Goat Talk 2, consists of songs like Tell my Story, Goat Talk, Corona DeJaVu, and others.