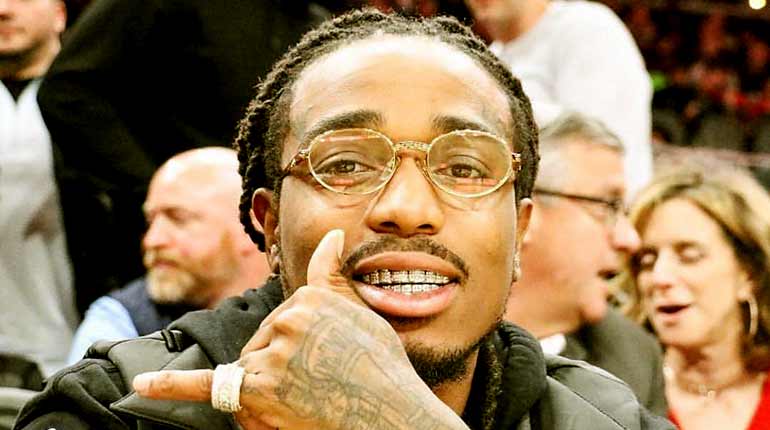 Quavious Keyate Marshall or Quavo for short is an American Hip Hop artist famous as part of the trap music group, Migos. It constitutes his cousin Offset and his nephew, Takeoff, who is the youngest member of the trio. Migos delivered the lyrical ingenuity in songs like Bad and Boujee, Motor Sport and Walk it Like I talk it. However, each of the artists has had a flourishing career, and we bring the focus on Quavo’s net worth and his road to fame, while briefly touching on his financial achievements.

Who is Quavo? His Career Info

Born in Athens, Georgia back in 1991, the titles he has now as an American rapper, singer, songwriter and record producer only came to light in 2008. Since then, he has acquired other names like Yate and Huncho, but before all of that, Quavo started as a football quarterback while at Berkmar High School.

The rapper lived with his mother, Edna Marshall who worked as a hairdresser after his father died at the age of four. Moreover, she also raised the other members of Migos as her own in the same household, which would explain how close they are.

Fast forwarding into 2009, Huncho quits high school in his senior year having already formed Migos a year earlier. They first called it Polo Club but opted out of it since it was too familiar. The rappers released two mixtapes called Juug Season and No Label in 2011 and 2012.

However, they only came to the mainstream in 2013 when Canadian Rapper Drake remixed one of their singles called Versace. Migos later dropped their first album titled Culture in January 2017 having signed to 300, and Quality Control labels. It’s from here that Huncho released different tracks away from the group and thereby doubling his net worth.

The road so far has led Quavo to release one studio album, a collaborative album and a fair share of singles featuring other artists. His debut studio album came in October 2018 and peaked the US Charts at position 2

His collaborative album called Huncho Jack, Jack Huncho featuring the rapper Trapper Travis Scott also rose to position 3 in the US and 34 in the UK. Some of the rapper’s best singles include I’m the One by DJ Khaled and Justin Bieber, Congratulations featuring Post Malone, Pick Up the Phone with Young Thug that all are all Platinum certified by the RIAA.

Others include Champions, Portland, and No Brainer featuring Chance the Rapper. Huncho’s music has been phenomenal winning him awards at the American Music Awards and two Teen Choice Awards. Moreover, he has received nominations at the Billboard Music Awards as well as the MTV Video Music Awards.

With all the collaborations he has done both as an individual artist, and as Migos, it’s safe to say that the rapper is well on his way to make millions. As of 2019, Quavo’s net worth hit an all-time high of approximately $16 million as per online leaks and reputable sources.

His net worth all comes down to his music sales, performances, and world tours. But wait, there’s more. As a regular household name, the rapper also partnered up with some brands Big Baller Brand and Finish Line to promote their footwear and apparel

Quavo’s fashion statements could tell you about a bit about his lifestyle. The rapper is always wearing custom designed watches by Avianne and Co Jewelers that cost over $50K. He also supplements his vibrant lifestyle with exotic high-end cars like the Lamborghini Aventador, Mercedes McLaren 720 and the AMG G63.

Like most celebrities hide their private residences, Quavo also follows the trend. However, with a little digging, we uncovered the truth about his home. Huncho has three different houses in Georgia that total to $2.58 million. If that’s not enough, his net worth also holds account of a private jet that he owns.