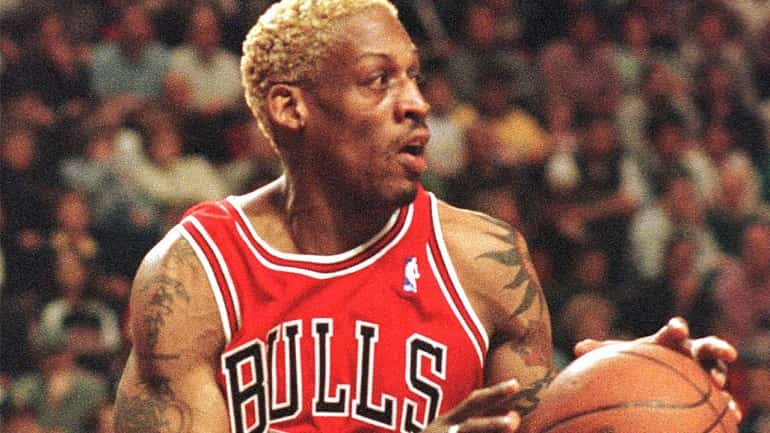 Talent is what never fades away and remains constant with you. And the perfect example for the same is Dennis Roadman, the famous NBA player. Further, in the article, we are going to disclose some facts about his family, three marriages and divorces, the controversies he had been a part off and his net worth.

Dennis Roadman was popularly known as “The Worm” during his NBA career due to his fierce rebound and defensive techniques. The star is the one full of talent and creativity. He has not only tried his charm successfully in NBA but has also worked as an actor.

He played at the small forward position before becoming a power forward. He has successfully backed NBA All-Defensive First Team honor, seven times. He has also won the NBA Defensive Player of the Year Award twice in his career. He is applauded for leading NBA in rebounds for seven consecutive years. Dennis also lead to win five NBA championships. But all this wasn’t easy to achieve. Dennis was a part of many controversies.

Dennis didn’t experience a happy childhood and was a typical introvert in his early years. He even went on a suicidal attempt in 1993. But aborting the attempt, he represented and reinvented himself as a bad boy. He got piercings and tattoos and continuously dyed his hair in artificial colors to maintain his bad boy image. He had frequent clashes with the players of other teams. A funny incident, he wore a wedding dress for promotions of his autobiography in 1996.

Alleged high-profile affair with Madonna, brief marriage and then divorce with the actress Carmen Electra was everything to give spice to the paparazzi. And to top it all, he gained international attraction during his North Korea visit where he was seen befriending Kim Jong-un.

As mentioned already, Dennis didn’t have a happy childhood. His father Philander Roadman Jr was an Air Force member who went later in the Vietnam War too. His father abandoned the family. According to Roadman, he is the oldest of his total 47 siblings.

After Philander abandoned the family, Shirley, Dennis’ mother had to do odd jobs to support the basic needs of the family. Rodman grew with his two sisters Kim and Debra in the Oak Cliffs. Dennis was very much attached to his mother. He said that his mother supported the girls more since she felt that Kim and Debra were much more talented than Rodman. He said being a basketball enthusiast, he was a laughing stock for others.

Like everything, his personal life has always made the news. His first marriage was with Annie Bakers. They had a daughter named Alexis. The two parted their ways in the early 1990s. Later, “The Worm” or popularly then known as the bad boy, had an alleged affair with the high-profile singer Madonna.

Not to end here, he married the actress and model Carmen Electra. The two filed for separation in April 1999, a year after their marriage. The year he divorced Carmen, he met Michelle Moyer. The two had two kids together, a son whom they named Dennis Junior (DJ) and a daughter Trinity. On the 42nd birthday of Dennis, the two got married in 2003. A year later, Michelle filed a divorce. Though the two spent several years to resolve, attempting to reconcile. The separation officially occurred in 2012. Rodman had to pay massive sum under the head of child and spouse support.

Dennis Rodman Net worth, Salary, and Sources of Income

The estimated net value of Dennis is USD 500 thousand. His sources of income include his basketball career, films, and books he wrote.

The media darling Dennis has this net worth because he had to pay a considerable sum to his ex-wife as child and spouse support money.

House and cars in Dennis Rodman net worth

His house is located in Bloomfield, MI. His previous residence was sold recently. From a high-grade player, it all went down after his divorce as he had to pay a considerable sum to his ex-wife Michelle.

The NBA hall of fame player stands 6ft 7in tall. He weighs around 100kgs. His athletic body was then perfect for a power forward position.

How old is Dennis Roadman? His Age, Birthdate, Birthday

Dennis Keith Rodman was born in Trenton, New Jersey. He was born on 13th May 1961. The star falls under the Pisces sun sign.

Here is just about the paparazzi’ favorite, Dennis Rodman.